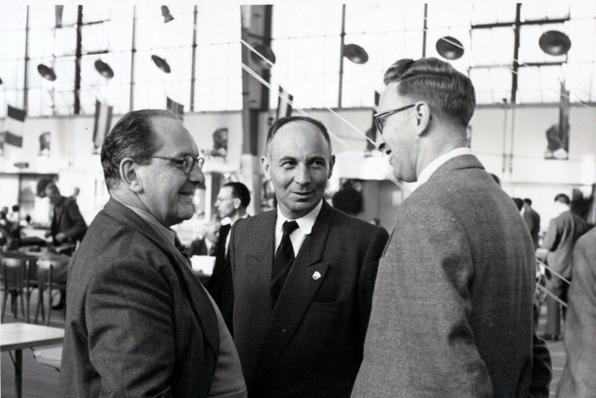 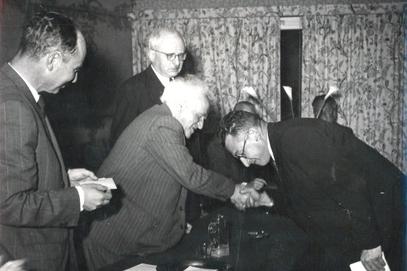 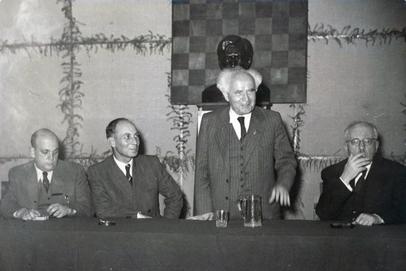 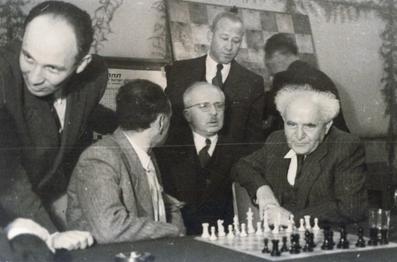 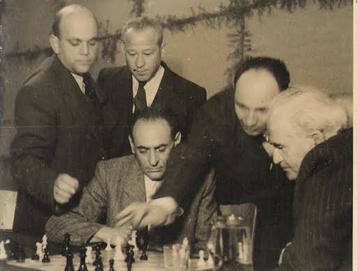 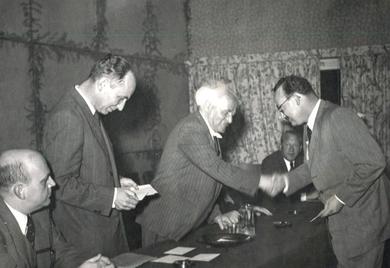 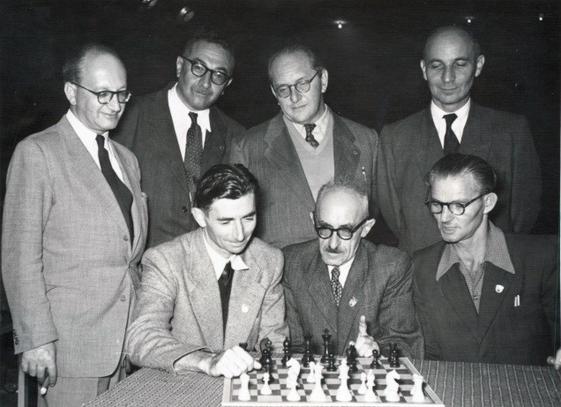 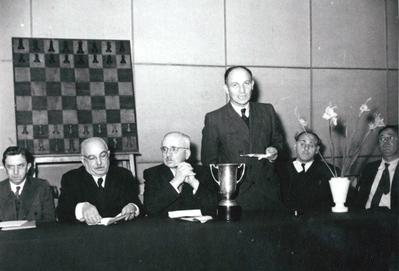 Barav was not just a player. He was also an activist and a chess organizer, for example of the 1951 -- first -- Israeli championship. The 1951 championship  took place in the "Women Pioneers' Hall" in Tel Aviv. Below is a collection of photos  of Barav with the players and other in the tournament. Barav was the principle organizer of the tournament., the first after independence. It was mostly due to his effort the tournament succeeded.

Barav speaking. To the left Rosen, Remez, and Turchiner.

Czerniak and Barav chatting with Smyslov.

In the case of the 1954 Olympiad, too, Barav accompanied team, helping with its organization, and so on. Here are two good photos taken at the Olympiad (or right before it).

Barav also "did his bit" as a patriot spreading chess in the country, especially during the days of the war of independence and in other places. For example, Shaul Hon's Davar chess column in 1948 points out that Barav gave a simul to soldiers 'in a base somewhere in Tel Aviv' which is the first simultaneous display ever given (our research so far shows) to IDF soldiers, Aug. 1948 (+16 -1) and in Dec. 1948 in the Lasker chess club (+18 -1 =3; reported in Dvar, Dec. 31st, 1948, p. 17); Davar added that the entire seanse​ took only a little over two hours!

Finally, it would surpise nobody to know that Barav was one of the founders of the Palestine Association in the 1930s (the precursor of the Israeli Chess Federation), as Mohilever reminds the readers in Barav's obituary in Shahmat.

Many of the photos on this page are well known in Israeli chess literature, but usually in a much lower quality, as newspaper reproductions. E.g., the group photo of the 1954 team was quite commonly used in newspaper reports and (later) books or magazine reports on the 1954 Olympiad, e.g., in Porat's report from the Olympiad (Davar​, 6/10/1954, p. 21) or in Cazerniak's 64 Mishbatzot​ report (Jan.-Feb. 1957, p. 184). We thank Barav's son for bringing the originals to our attention!